Tour to Sreemangal – The Tea Capital of Bangladesh

There is a quote about the tour that “Jobs fill your pocket but adventures fill your soul“. Like every other day, we were doing our scrum meeting at the office. After finishing the meeting, our VP of operation honorable Mostofa Haider sir announced that we are going to explore Sreemangal – the tea capital of Bangladesh as an official tour in this year. We are all super excited about hearing this because it feels good to be lost in nature.

As our planning part of the tour, we all came to the railway station at morning 6 am of 23-3-2019. We have 15 members in our team except Anik. He was in the USA attending the Microsoft event. We really missed him a lot.  At 6:30 am the train leave the station and our journey started for Sreemangal. We have seen the beauty of nature seating beside the window.

We took our breakfast on the train at 9 am. At 11:30 am we reached Sreemangal railway station. We hired 2 microbus that carries us to the hotel. Then we took some rest and got refreshed at the hotel Skypark. The Skypark hotel is situated at the center of the Sreemangal city. It was a very nice hotel. We were really satisfied with their hotel room and services. After refreshed, we are heading to the Kutumbari restaurant for lunch. We all were so much hungry. It was a well-decorated restaurant. It is the best food place in Sreemangal. We enjoyed their delicious food a lot. Hope you will not feel bored eating food at this place.

Having our lunch, we started exploring the city places like tea states, 71 genocide park and a local zoo. In the meantime, we tasted the famous 7 layered tea of Sreemangal. The city is not too much crowded. We liked it very much. 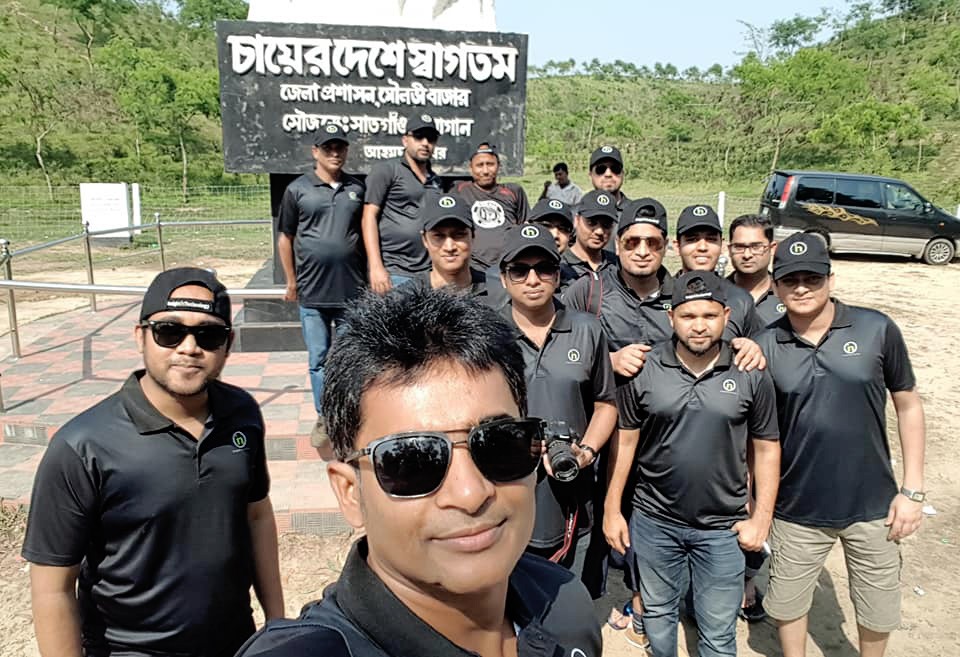 In the evening, we return to our hotel. We tasted the tea at Satkora restaurant. After drinking their tea, we feel that it was the best milk tea in the city we ever drink. That’s all for the first day of our enjoyable tour.

We enjoyed a lot visiting the local zoo and the Madhabpur lake. We found lots of animals in the zoo. We enjoyed a lot while they are playing in the cage. We see that lots of school and college students came to the zoo for having fun with the animals.

Then we were heading to the Madhabpur lake. This lake is located at Komolganj of Sreemangal thana. This lake is inside the Madhabpur tea state garden. We found that the Madhabpur lake is situated between the small hills and most of the hills are filled with tea plants. We have found that some teal plant was more than 80 years old. We really astonished hearing it from the watchman of the tea garden. We also heard about the miserable life of tea garden labor. Basically, women’s are allowed to work in the tea garden. We have gone to the top of the hills that gave us almost a panoramic view of the lake. This is really an ideal place for Photographers.

Madhabpur lake is full of lilies at the banks of its every side. The color of these lilies is kind of blue. It’s really so beautiful and the lily looks a bit glowing from far. It seems that someone did a photoshop work on the flower for that glowing. We are running out of time so that we were unable to cover the whole area. So better luck next time. After exploring the Madhabpur lake we were heading to Lawachara national forest.

Lawachara is known as a forest of beauty. The park is situated close to the city of Srimangal but within the Komolganj Upazila, Moulvibazar District. This park covers approximately 1,250 hectors of semi-evergreen tropical forest. The land was declared as a national park by the Bangladesh government on July 7, 1996, under the Wildlife Act of 1974. We buy tickets for our team and enter the forest. The entry pass was 20 Taka for adults and 10 Taka for Children. Foreign visitor’s ticket was 5 USD and there also has the facility to park your vehicles which will cost you near 25-50 taka.

You will find different wildlife here. In Lawachara forest there are 450 Species of Plants. 6 species of Reptiles, 240 species of Birds and 20 species of Mammal available.
You will find different kind of Monkeys, Foxes, Wild dogs, Snakes that surely make your mind joyful. During the rainy season, you should alert about Leech. Though we didn’t face any leech issue because of the dry season. This forest is a popular place for nature lovers. You will see a wide range of forest birds there. The micro-climate of tall forest trees, cool clean air, and green seem a world away from the rest of Bangladesh.

There is another reason this place is famous enough. The two famous movies were shot here. A Hollywood film named “Around the World in 80 days” and Bangladeshi film “Amar Ache Jol by Humayun Ahmad” partially shot in this place. The partial shot of these two films is taken in this forest’s railway line. After being released this area from those movies is introduced around the world.

Two villages of Khashia local community are located inside the forest. We were really really enjoyed walking into the forest and feel the green beauty of this place. This is all about our 3 hours of Lawachara experience.

We stayed for 1 night at the hotel Skypark. After exploring the whole day we came back to the hotel and started our evening program. As planned previously, we divided the evening program in three part. At the first part, we arranged some fun games like quizzes, blowing balloons, etc. This part was really very much fun. There was a three group of team and each team consist of three members. Winner of every group participated in the final game. We all have participated in these games. Our judge selects the 1st, 2nd and 3rd winner person from each game very carefully. Our beloved CTO Galib sir and VP of Operation Haider sir was in the judging panel and chief UX architect Omar sir was responsible for organizing the evening event.

Then we started the prize giving program who has won the first, second and third position in the game. We also gave thank you gift to others for their participation in the game. So everybody was happy about this.

In the 3rd part, another fun game was started. We bought some air-ballons from Dhaka. We have gone to the rooftop of the building and blew up the air-balloons. That was an amazing experience for us to see the air-balloons flying in the dark sky.

We were really so much happy having lots of memory from this tour. In the end, we want to give special thanks to our beloved CEO Enam sir for everything about this group tour. Also thanks to Mr. Galib and Mr. Haider sir for making this tour successful. And finally, the big thanks goes to Mr. Omar sir for organizing the tour with his hard work and patient.